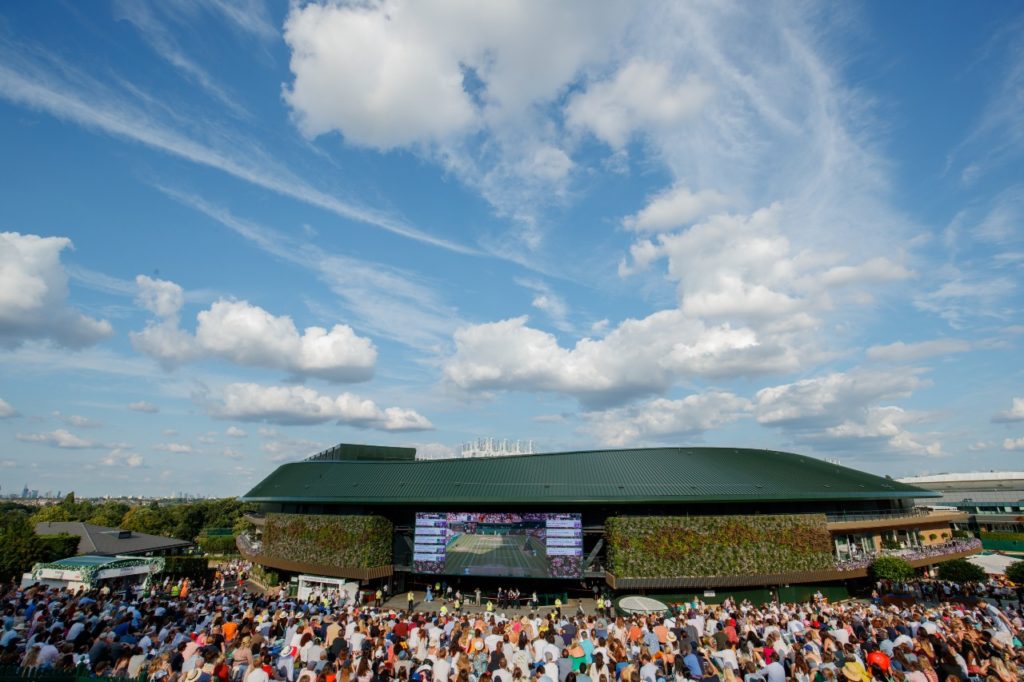 The Championships, Wimbledon. A two-week spectacle that grips tennis fans across the globe in a captivating exhibition of skill, stamina and determination. Philip Jenkins (Sport Positive Leagues) spoke to Hattie Park, Sustainability Manager at The All England Lawn Tennis Club (AELTC) to discuss the implementation of the AELTC’s environmental sustainability initiatives at Wimbledon and its strategy for the future.

A weather forecast envisaging a scenario of how rising emissions might affect the climate at Wimbledon in the summer of 2059 can be viewed on The Championships’ website. Met Office meteorologists anticipate that tennis players would face competing in temperatures of 37 – 40 degrees Celsius during the day. This scenario could result in multiple effects for both players and spectators such as longer breaks between games and sets, or difficulties travelling to and from SW19, due to the impact of the heat on the transport network.

“It [The video] brings what we may face to life in a really compelling way and we shared it widely internally as well, because obviously for our future plans, we need to consider the change in climate,” explains Hattie.

The climate in the 2050s depends partly on how much society can reduce global greenhouse gas emissions in the years to come. Through a dedicated sustainability page,the AELTC shares clearly defined aims in its approach to protecting the environment today and for the future, that are:
• Reducing emissions from its operations to ‘net zero’ by 2030
• Being a resource-efficient organisation by 2030
• Contributing to a ‘net gain’ in biodiversity by 2030
• Using its influence to inspire wider action

As Wimbledon is a large spectator event, the AELTC is aware of its impact on the environment and currently tracks its operational footprint into categories that cover the following emissions:
• Scope one – gas and vehicle fuel
• Scope two – purchased electricity
• Scope three – water, waste, player, tournament official and staff travel

Referring to the actions required to tackle each of the scopes, Hattie reflects: “Our priority is to eliminate scope one emissions. One part of that will involve transitioning to electric vehicles. We already have electric lawnmowers and some electric vehicles in our Championship transportation fleet, but we need to over time get more of our fleet and other equipment into electric.”

“And the big challenge for us will be decarbonising heat provided by gas. At the moment our approach is about our energy efficiency, essentially; mothballing buildings, making sure we operate our buildings as efficiently as possible. But for the future, we are looking at ground source and air source heat pumps which means we will be able to reduce and then eliminate our dependency on gas.”

“With regard to scope 2 emissions, we buy renewable electricity but obviously it’s important that we are efficient with the use of that as we can be. Our Estate Management team have done an amazing job getting a much better handle on how we are using our electricity, where we are using it and then controlling it. Our electricity use for last year was about 25% down from where it was for our baseline in 2019 and a contributor to that reduction is from straightforward energy efficiency; switching things off, swapping in high efficiency LED lights and using motion sensors to eliminate unnecessary consumption. We are generating a small amount of our own renewable electricity on-site, we have solar panels at our Community Tennis Centre at Raynes Park and we’ll have some going onto our new Indoor Tennis Centre on Somerset Road which is nearly complete. Other planned new buildings are incorporating solar PV as well and we’ll continue to buy renewable.”

“For scope 3 emissions which are beyond our direct control, such as those from flights, that’s where we will need to invest in carbon sinks, to match off those emissions. There won’t be a fully decarbonised aviation sector by 2030, so we’ll look to verifiable, permanent offsets that ideally have additional benefits as well as carbon sink restoration. And we will be widening what we track and address as part of our Scope 3 emissions which will give us a great opportunity to engage further with our partners and suppliers.”

At the 2021 edition of The Championships, the AELTC held an Environment Day on July 1st, teaming up with COP26, the BBC and the Met Office to focus on the importance of taking action on climate change.

“It [the day] originated from a desire to put our support behind the COP26 process and use the platform we have during The Championships to show that this is a really important event. 2021 was a big year for climate in the UK. It’s a crucial decade for climate action.”

“There was content throughout the day on various BBC channels. We also used our own channels on social media, in addition to Wimbledon radio and Wimbledon TV. The Chairman invited environment champions to attend the Royal Box for the day and we held a briefing for TV commentators, so we could get the message out across all media channels as much as possible,” Hattie explains.

Collectively, everybody at the AELTC has bought into the organisation’s environmental positive goal which not only focuses on emissions, but resource efficiency and enhancing biodiversity.

“Whether that’s working with our commercial team on how we engage with our partners, the food and drink team introducing delicious plant-based food across all of our menus, the reusable cup for drinks to cut back on single-use plastic, or our plans for the future with the AELTC Wimbledon Park Project in terms of enhancing the biodiversity there and doubling the tree cover, it’s really an organisation-wide approach. I’m just a tiny part of it. It’s down to everyone to deliver the operational efficiencies both in how we plan for the future and how we do things day-to-day. It involves everyone,” Hattie describes.

For tennis tournaments and clubs across the globe that have yet to implement environmental sustainability initiatives, Hattie’s words of advice are: “Just start! Talk to club members or your competitors, find out what matters to them and then if you are already taking action, communicate what you’re doing. It’s easier to get going than you might think, and environmentally positive steps are a great way to connect with people and will save you money as well.”

Previous Post : Forbes: How Sport Set The Pace At COP26